Health Expenditure Data from the MEPS

Two-part models are commonly used to model healthcare expenditure data because a large fraction of patients don’t spend anything on medical care in a given time period. To see this, lets look at some real expenditure data from the Medical Expenditure Panel Survey (MEPS) 2012 Full Year Consolidated Data Files. The dataset can be found here. To speed up data manipulations, I recommend using the data.table package. 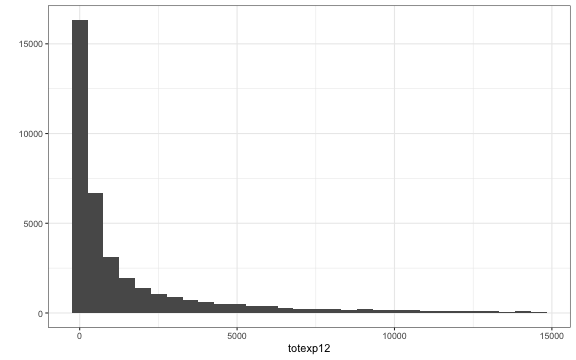 If the data is lognormally distributed, then the log of expenditures follows a normal distribution. We can investigate whether this is the case with the following plot. (Note that the syntax DT <- DT[...] is redundant but R Markdown prints the the output otherwise.) 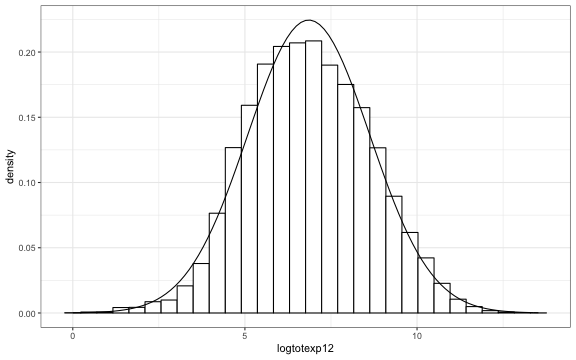 Different models for the continuous component can dramatically alter the results so model selection is important. This choice will depend on the goals of the analysis.

Before we begin we have to edit the variables in the MEPS to make them suitable for modeling. We model expenditures as a function of age, self-reported health status, race and ethnicity, and insurance status. A more accurate prediction model would also include variables containing detailed clinical information, but we will not consider clinical data here.

Lets subset our data set to exclude unnecessary variables and limit ourselves to non-missing observations.

To test our model we will estimate it on half of the data and then use the parameters to predict expenditures for the other half. To do so, we’ll create a randomly chosen variable indicating whether the respondent is in the training set or the test set.

We fit the binary portion of the model using logistic regression. The continuous component is modeled in three different ways: with a simple OLS regression on spending in levels, with OLS on the log of spending, and with a gamma GLM. The gamma model is estimated with a log link function, which constrains the predicted means to be positive and ensures that mean expenditures are a linear function of the coefficients on the log scale.

Using these models we can predict mean expenditures, $Y$, given a matrix of covariates, $X$, as follows,

The first term can be easily estimated using a logistic regression. The second term is easy to estimate if the expected value of $Y$ is being modeled directly. For instance, in a gamma GLM with a log link, we model the log of mean expenditures,

where $\beta$ is the coefficient vector and we have suppressed the dependence of $E[Y]$ on $X$. We can therefore obtain the mean of expenditures by simply exponentiating $\log(E[Y])$. Things are less straightforward in the logtransformed OLS regression since we are modeling the mean of log expenditures,

and $E[\exp(\log(Y))] \neq \exp(E[\log(Y)])$. We can however estimate mean expenditures if the error term, $\epsilon = \log Y - X\beta$, is normally distributed with a constant variance (i.e. homoskedastic), $\sigma^2$. Then, using the properties of the lognormal distribution,

With this in mind, expenditures can be predicted as follows.

We will assess model fit using the root mean square error (RMSE). THE RMSE is just the square root of the mean square error (MPE), which has a nice interpretation because it can decomposed into the sum of the variance and squared bias of the prediction.

The log OLS model performs the worst because of the retransformation issue. The OLS and gamma models produce similar results and the OLS model actually performs the best. This shows that OLS is a reasonable estimator of the conditional expectation even when the errors are clearly not normally distributed.

The main difficulty with log transformed OLS is that the retransformation is invalid if the errors are not normally distributed with a constant variance. Without the normality assumption, expected expenditures are given by

The second term can be estimated using the Duan smearing factor, which uses the empirical distribution of the errors. That is, letting $\phi(x) = \rm{E}[\exp(\epsilon) \vert X]$,

where $\hat{\epsilon} = \log Y - X\hat{\beta}$ and $i$ refers to the $i$’th survey respondent. The smearing factor can also be estimated separately for different groups if one believes that the error term is non constant (i.e. heteroskedastic). We estimate both a constant smearing factor and a smearing factor the varies by age categories. The age categories are ages $0-1, 1-4, 5-9, \ldots, 80-84$ and $85+$.

We can see that adjusting for non-normality makes almost no difference in the RMSEs because the error term is already approximately normally distributed. On the other hand, adjusting for the non-constant variance improves the prediction considerably. In the end, predictions from the gamma model, the OLS regression in levels, and the log OLS regression with non-constant variance are very similar.

Here we will use simulation to compare predictions from the models to observed data. Andrew Gelman and Jennifer Hill refer to this type of simulation as predictive simulation.

We will consider three two-part models for health expenditures: a logistic-normal model, a logistic-lognormal model and a logistic-gamma model. For the normal and lognormal models we will assume that the error term is constant across individuals. Both the lognormal and gamma distributions have the desirable property that the variance is proportional to square of the mean.

Lets begin by simulating data from the logistic-normal model.

We use a similar simulation procedure for the logistic-lognormal model

To simulate data from a gamma distribution, it is necessary to estimate a shape parameter, $a_i$, and rate parameter, $b_i$, for each survey respondent. We will assume that the shape parameter is constant across observations, which implies that $E(Y_i)=\mu_i = a/b_i$. R uses methods of moments to estimate the dispersion parameter—which is the inverse of the shape parameter—in a gamma GLM. Programmatically, it divides the sum of the squared ‘working’ residuals by the number of degrees of freedom in the model.

We would prefer to estimate the shape parameter using maximum likelihood. We can do this using the function gamma.shape from the MASS package. With the shape parameter in hand we can then estimate the rate parameter as $\hat{b}_i = \hat{a}/\hat{\mu}_i$ where $\hat{\mu}_i$ is the predicted mean for the $i$’th respondent. With these maximum likelihood estimates, we can then simulate expenditures using the logistic-gamma model.

Now lets take a look at how well our models fit the observed data. 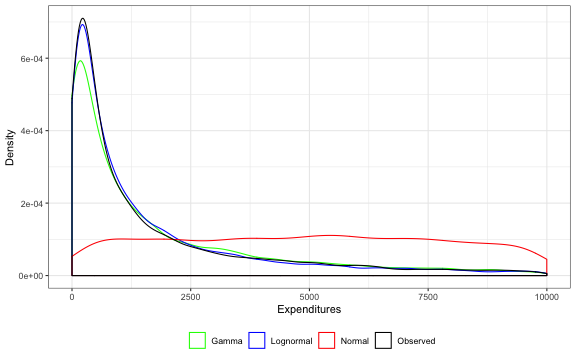 We can also compare the quantiles of the simulated distributions to the quantile of the observed data.