This page shows how to employ a Markov cohort model for cost-effectiveness analysis using R. The analysis replicates a paper that is commonly used for teaching purposes and compares combination HIV therapy using zidovudine and lamivudine to zidovudine monotherapy.

Setting Up a Markov Model

In a Markov model patients move from one mutually exclusive disease state to another over a series of discrete time periods. A fully specified model consists of 1) disease states, 2) the probability of transitioning from one stage to the next, 3) treatment costs in each stage, and 4) quality of life weights by stage.

In our example, HIV patients can be in one of the following 4 states at a given point in time:

The probability of transitioning from state \(i\) to state \(j\) at time \(t\) is denoted by \(p_{ij}\). Under monotherapy (treatment \(0\)), the estimated transition matrix is constant and given by,

We set up the transition probabilities in R.

Treatment effects are typically measured by quality-adjusted life-years (QALYs). However, we follow the original paper which measured effectiveness with (unadjusted) life-years. In mathematical terms, this means that the 4 states are weighted with the row vector \([1\; 1\; 1\; 0]\).

A cohort simulation uses the Makov model to measure the experiences of a hypothetical cohort, say 1000 patients, over a set period of time (i.e. 20 years), under each treatment option.

We load an R function that simulates the costs and effects of an intervention given a transition matrix P; an initial row vector z0 containing the number of patients in each state at time \(0\); the number of cycles ncycles, the costs in each state; the quality of life weights; and a discount factor for future costs. (Note that, like the original paper, the discount factor is only applied to costs, although a discount could be applied to life-years as well.)

At each cycle, the function calculates the number of patients in each state z[t, ]; total costs per patient, c[t]; and life-years e[t]. The algorithm is very simple but appears more complicated because it allows for both time constant and time-varying transition matrices and costs. The time-varying transition matrices are necessary because lamivudine is only assumed to be given for the first two-years of treatment.

Using the function we simulate outcomes under both treatments.

Armed with the simulation results, we can plot survival curves by treatment. 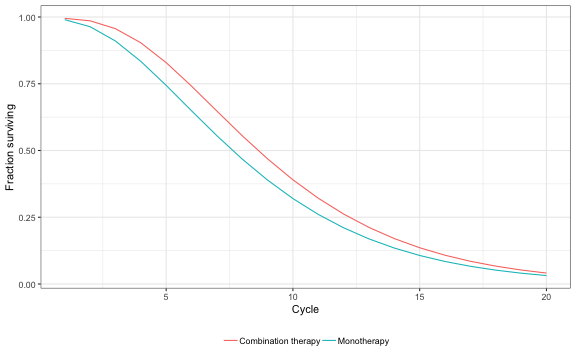 which suggest that a decision-maker should only approve combination therapy if he or she is willing to pay over 6276 pounds for an additional life-year gained.